Its official! After more than a decade of planning and construction the wait is now over as London Gateway has officially opened its brand new state of the art terminals for business!

Costing £1.5billion and located in Thurrock, Essex, the port is 20 miles down the River Thames from London, and will be the UK’s second largest capable of accommodating the largest cargo ships in the world.

The MOL Caledon received a warm welcome as the first scheduled vessel to arrive into the Port, on 7 November 2013, bringing in all kinds of cargo which has now been distributed around the UK.

For photographs of the new London Gateway and for further information regarding the new Port visit www.londongateway.com/news-media/photo-gallery

For quotes on your imports and exports requirements get in touch, we would love to hear from you! 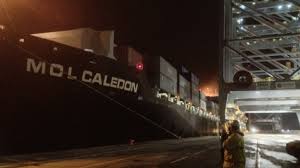 London Gateway, on the map!