The container ship ‘Majestic Maersk’ has been gaining much interest since she set off from the Far East a few weeks ago on her maiden voyage, and after being officially named in Copenhagen on 29 September and welcoming over 50,000 visitors on board for a tour, it’s no wonder that Felixstowe Port was a hive of excitement this week with preparations in full force for her arrival as she made her maiden visit to the UK port.

Crowds of shipspotters gave her a warm UK welcome as they made their way to Landguard to watch the container ship enter Harwich Harbour where she was moved by tugs to the quayside of Berths eight and nine, the port’s newest extension.

Majestic Maersk is the Line’s new Triple-E series of vessels, which can carry 2,500 more boxes than the previous largest ships which import and export across our vast oceans.

She has now set off on the return leg of her first Asia-Europe-Asia voyage. 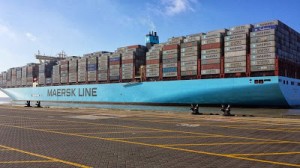