A giant Antarctic iceberg has broken free of the continent and could be about to drift into busy international shipping lanes, a team of British scientists has warned.

The Government has awarded experts with an emergency grant of £50,000 to fund a six-month project in which they will try to track the progress of the ice and predict its movements.

The iceberg has broken away from the Pine Island Glacier (PIG), part of the Western Antarctic ice sheet,

Experts say that it often takes a while for bergs from this area to get out of Pine Island Bay but once they do that they can either go eastwards along the coast or they can circle out into the main part of the Southern Ocean. If this happens this could prove a danger  for ships as this would take it into the path of one of the world’s busiest international shipping lanes, and trigger hazard warnings via a number of observation agencies.

A crack in the massive PIG ice sheet was first noticed by NASA scientists in October 2011. Back then it was only a partial fissure of around 80 metres (260 feet) wide. 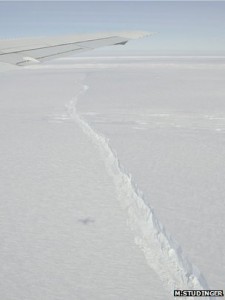