Cargo is piling up as a strike in the container port in Hong Kong has entered a 15th day. 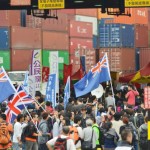 Hundreds of dock workers and crane operators are striking as they have not had a pay rise in 10 years even as the cost of living has soared, they are demanding a pay rise of around 20 percent and better work conditions. They say they are overworked, not given enough time to rest with inadequate breaks.

The port operator backed by Hong Kong’s richest man Li Ka-shing failed to reach a deal for higher pay this week prolonging a dispute that could cost the city its position as the world’s third-largest container port.

The strike has hit a nerve in Hong Kong, where a growing wealth gap and some of the world’s highest property prices have piled pressure on leader Leung Chun-ying and brought the city’s tycoons head-to-head with the government, which was sworn in last July amid a raft of populist promises.

Hong Kong’s public has become increasingly vocal over the city’s yawning wealth gap, taking to the streets to protest against the government and the city’s wealthy tycoons.

Hong Kong, which serves as the gateway to mainland China’s manufacturing heartland, ranks as the world’s third-largest port, after Shanghai and Singapore.

Some vessels are being diverted to the neighbouring Chinese port of Shenzhen.

Please get in touch if you have concerns regarding Hong Kong shipments.