When you think “shipping container” you are likely to conjure up images of giant metal boxes used for transporting all kinds of cargo all around the world…Would you ever think of living in a building made from them?! Many imaginative homeowners are doing just that.

Shipping containers are becoming a hugely popular, quirky, cheap way of living for many throughout the UK. With lots of imagination containers are popping up in the guise of offices, studios, sports facilities in schools and colleges, homes and even a doctor’s surgery.

In east London, they’ve gone one further and formed a container community. Directly across the river from the O2 Arena stands Trinity Buoy Wharf, a collection of old waterside buildings, in the centre of which is Container City. This consists of two multicoloured stacks of shipping containers, piled up four storey’s high, accommodating 70 residents. 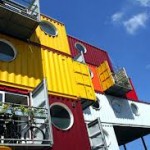 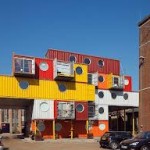 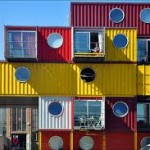 Last year it was reported that a housing trust in Brighton wants to use 36 adapted containers as a stop-gap for people without a permanent home. Each container provides a bathroom and kitchen. Stacked container homes have also proved successful in Holland where they have housed the Amsterdam’s student population. Young homeless people in east London could soon be living in converted shipping containers as part of plans to help them save up for permanent homes.

This low cost approach to home buying is becoming more and more popular. With prices starting from £20,000 we ask…is it time you started to think inside the box?!