The largest industrial action in Hong Kong for decades has ended after hundreds of port workers compromised and accepted a pay increase package offered by contractors of Hong Kong International Terminals. 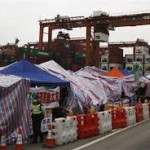 The workers were initially asking for a 20% pay increase, but eventually after striking for 6 weeks decided to accept a 9.8% offer after the employers provided a written reassurance to guarantee the rise and promised to improve working conditions.

Workers were said to be underpaid after receiving no increase in pay packets for 10 years, even though the cost of living has soared. They also say they work under very bad working conditions with no lunch or toilet breaks.

They will  resume to their jobs once they have signed their new contracts.