5 year old container ship MOL Comfort split in two on June 17 off the coast of Yemen as it sailed to Europe from Asia after suffering catastrophic cracks to the hull during bad weather. The ship’s stern section eventually sank on June 27 before any salvage operation was attempted.

The crew of 26—11 Russians, one Ukrainian and 14 Filipinos—abandoned the ship and was rescued from two life rafts and a lifeboat by German flagged container ship Yantian Express

Many of the 1,700 boxes stowed on deck were spewed into the sea, some containers sinking along with the ship. The forward section of the doomed vessel then caught on fire while being towed to a port of refuge in Oman. It has been reported that many containers in fore section of MOL Comfort were loaded with inflammable and explosive cargoes, making firefighting attempts just futile. With most of its containers still on board, the vessel sank taking the destroyed containers with it.

As the investigation into the cause of the catastrophic structural failure continues, MOL has phased out of service six sister ships for dry-docking to carry out precautionary strengthening of their hull sections. 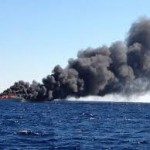 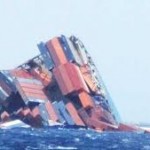 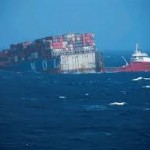