Revival of Ports “up North”

With the South East being home to 2 large container ports large enough to house vessels, which are the length of four football pitches and the height of 14 double-decker buses, and now also home to the new Thames Gateway opening this year questions are being raised about the amount of road congestion and indeed costs involved with transporting goods hundreds of miles north via road. 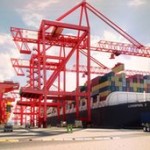 Peel Port’s owner of Liverpool Port and Manchester Ship Canal are investing a staggering £500m to meet these demands. Work has already started on deepening the River Mersey to allow the new generation of super-sized cargo ships to dock at the planned Liverpool 2 Terminal. Last week over 300 industry guests gathered at the UK port of Liverpool to toast the launch of Peel Port’s deepwater container terminal.  Soccer legends Sir Bobby Charlton and Kenny Dalglish pushed the button to start dredging operations and launched a dazzling display of fireworks over the site of the new terminal in the Mersey.

Canal shuttles carry 250 containers, which is potentially 250 less lorries clogging up the roads, and a larger canal transporter is now in use moving 2,000 containers at a time.

The next stage of the firm’s plans involve creating a £140m hub at Port Salford with warehousing and a linked-in road development scheme.

New ports will also be built at Wirral, Bridgewater, Ince and Warrington

With the planned investment said to create huge savings in cost, carbon and congestion allowing shippers to move cargo from the Far East to Liverpool and 40 miles inland to Manchester warehouses without having to travel along UK roads, we will have to watch this space to see how the docks in the South East will be affected.