London Gateway, Britain’s newest deep sea Port and Logistic Park has opened its non operational state of the art terminal to welcome fire damaged Zim Rotterdam as she enters the UK after her traumatic voyage.

The 10,000 teu ship was diverted to London Gateway from Felixstowe at short notice on Friday 13 September and is the largest ever cargo vessel to enter the Thames Estuary and the first ever container vessel to arrive into London Gateway. She will stay here for a while to undergo essential maintenance and repairs.

The first train out of London Gateway left the port today (24/09/2013) fully laden with containers which had been discharged earlier this week from the ZIM Rotterdam.

This is the first commercial cargo to be unloaded at the new deep sea port ahead of the official opening later this year. 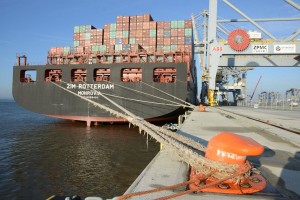