As the UK takes a complete battering with high winds and flood warnings, the knock on effect is causing havoc with our UK port operations. Gale force winds are making it impossible for the cranes to operate, causing delays and heavy back log.

At the weekend a container ship sailing from  Le Havre to Port Said lost 14 containers overboard in strong winds and large swells. The shipping line has confirmed there was no dangerous goods in the containers and no injuries or pollution have been reported.

Extreme cold weather which has settled over the eastern North American continent is also causing heavy delays in shipping operations since 4th January 2014 primarily due to ice buildup. Vessels are delayed until icebreakers can clear the way. 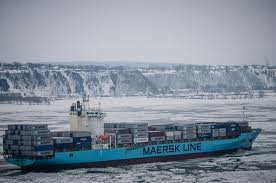