The 7,400-mile journey passed through Kazakhstan, Russia, Belarus, Poland, Germany, Belgium and France before entering the UK via the Channel Tunnel. 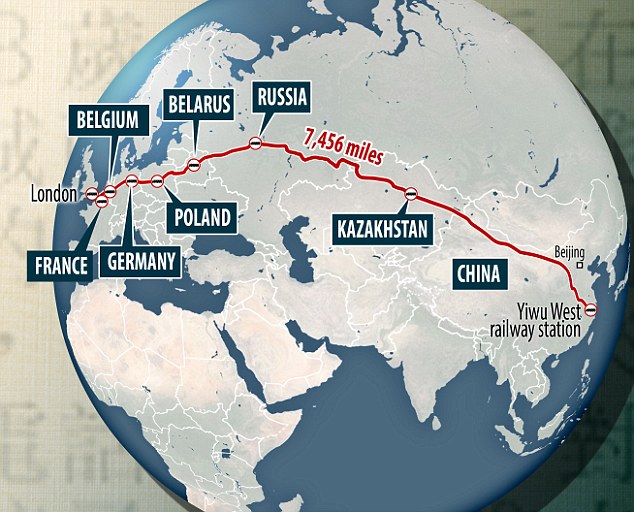 A number of different locomotives and wagons were used as the railways of the former Soviet Union states have a larger rail gauge than the other countries involved.

Laden with 68 twenty-foot equivalent containers, the train brought in a cargo of small commodities including household items, clothes, fabrics, bags, and suitcases. Ten containers were taken off at the German hub of Duisburg.

It is hoped the China Railway train will become a cost-efficient and time-saving way of transporting trade between China and the UK.

The service is cheaper than air freight and faster than sending goods by sea.

The trains will run weekly initially to assess demand.

So far there have been 40 freight train routes connecting Asia to 14 European cities, which form part of a trade route launched in 2013.

They are part of China’s One Belt, One Road programme of reviving the ancient Silk Road trading routes to the West, initially created more than 2,000 years ago.

A fanfare of costumed dancers, drummers and choreographers posing as Chinese dragons welcomed the inaugural service alongside members of the Chinese embassy and trade representatives.

Prime Minister Theresa May has said the relationship with China remains ‘golden’ as she seeks to bring in billions of dollars in Chinese investment as Britain prepares to leave the European Union.