US imposes new tariffs on $200bn of Chinese goods

The US is imposing new tariffs on $200bn worth of Chinese goods as it escalates its trade war with Beijing.

These will apply to almost 6,000 items. Many everyday goods such as handbags, luggage, furniture, textiles and wool will be included. The list also covers food items such as frozen cuts of meat, many different types of fish, fruit, cereal and rice. Products that help computer networks operate, such as routers, are also targeted.

The US taxes will take effect from 24 September, starting at 10% and increasing to 25% from the start of next year unless two countries agree a deal.

It is the biggest set of tariffs to date, and unlike the earlier rounds this latest list targets consumer goods. That means regular households may start to feel the impact from higher prices. US companies have already said they are worried about the effect of higher costs on their businesses and warned of the risk of job cuts.

Around half of all Chinese imports to the US are now subject to new duties.

The White House says its tariffs are a response to China’s unfair trade policies.

In theory, the tariffs will make US-made products cheaper than imported ones, and so encourage consumers to buy American. The idea is they would boost local businesses and support the national economy.

Many US businesses are critical of the tariffs. Farmers, manufacturers, retailers and other industry groups have formed a coalition to oppose the tariffs, calling them taxes on American families.

President Donald Trump warned that if China retaliated then the US would impose further tariffs with taxes on another $267bn worth of Chinese products. 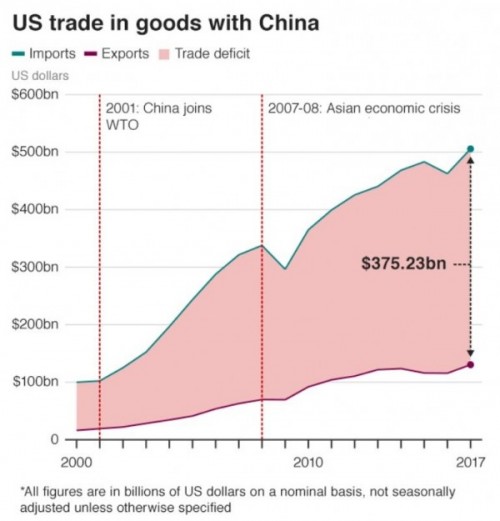 Talks between two countries’ officials ended in May without resolution. Efforts to restart discussions have failed to progress.

China is reported to have said it would reject new trade talks if Mr Trump imposed the $200bn worth of tariffs on its exports.