The Port of New York and New Jersey is still without electrical power in the aftermath of Super storm Sandy with the Port Authority underlining that there is “no time frame for repair.” 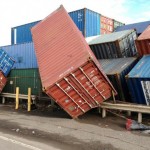 Facilities have been closed since midnight on 28 October.

“Port Authority staff are working to clear roads and communicating with the container terminal operators and major tenants to co-ordinate the clean-up and re-instatement of service.”

In an advisory to customers, the Port’s largest container terminal operator, Maher Terminals, said: “The entire Port has sustained devastating damage and flooding.”

A video taken during a Coast Guard helicopter flight over part of the Port earlier this week showed some containers overturned at the New York Container Terminal in the Howland Hook section of Staten Island.

But precise information about the scale of the damage at the port is difficult to come by because many telephone lines are not working and, in some cases, terminal personnel are unable to get to their offices.