Container washes up on UK Shore!

A fourth Maersk shipping container has been discovered off Devon on the southwest UK coast.

The lost cargo has been washed up after falling off the Svenborg Maersk in the Bay of Biscay during stormy weather, last month and was spotted off Start Point in Devon. All 4 containers have found their way to UK shores.

The contents of the latest shipping container are as yet unconfirmed.  Cigarettes, sachets of tea, pet food, packets of feta cheese and olives are among the cargo that has been found and cleared further along the southwest UK coast.

Containers have also been sighted floating in the sea off Cherbourg, France,

The 8,160 teu Svendborg Maersk lost about 520 containers overboard in heavy weather on the 14 February in the Bay of Biscay. According to Maersk 85% of the containers lost overboard were empty. 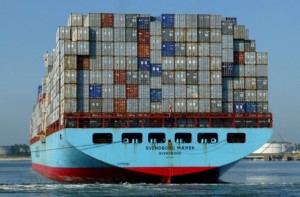