Airfreight of the future? 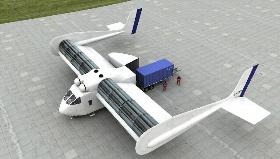 The German Aerospace Centre (DLR) is currently studying the feasibility of the FanWing freighter. As a result of a two year European Union project, the study will focus on how the plane would be operated, cost of maintenance and all other costs. If the study is successful, we could see these planes moving short range freight. The FanWing Airfreighter, has a short take off and landing distance and is able to carry up to eight tonnes. It was developed with the idea that it will be able to compete with rail and road freight. The website FanWing website states that FanWing could carry out a “safe autorotation landing” and has “truly quiet” ultra short take-off and landing capability. The FanWing design is unique in that it has an open rotor that spans the wing’s length (see picture – credit Adrian Mann / FanWing).

There are three other partners in this project, the DLR, the von Karman Institute and the University of Saarland. On the project’s EU website they refer to it as SOAR, which stands for diStributed Open-rotor AiRcraft, and describes FanWing as, “open-fan wing technology”.

It states that this technology, “is a new concept that distributes the thrust and powered-lift over the entire span of the wing resulting in a model-proven lift efficiency three times that of helicopters.”

The SOAR project began October 2013 and  is scheduled to be complete by September 2015. The EU contributed 591,214 euros to SOAR and the project partners’ have contributed 191,775 euros.